Drew made her way into the limelight in a dog food commercial at only 11 months old. At the age of 3, she played the role of Melissa in a Season 7 episode of the Waltons.

At five years old, Drew had her first brush with the big screen in the film, Altered States that was released in 1980. Since then Drew has gone on to star in movies including Wedding Singer, 50 First Dates and He’s Just Not That Into You. Drew is also a producer and has produced movies such as Charlie’s Angels, Fever Pitch, Whip It and Duplex.

Barrymore comes from a long line of actors and it seems that there was no way of escaping the acting gene. Her paternal grandparents and 4 great grandparents were all actors. However, her grandfather, John Barrymore was the most notable of them all. Her father John Drew Barrymore had a role in an episode of Gunsmoke in 1964.

Drew Barrymore’s first claim to plastic surgery occurred when she was only 16. The actress did a breast reduction surgery because she was experiencing a lot of discomfort. It is rumored that Barrymore has had a follow up visit with her plastic surgeon to do a breast lift. In the past, the star had noticeably sagging breasts but before and after pictures show the star showcasing perkier boobs.

After she opened up about her boob reduction surgery in 2007, the actress said that she was quite comfortable with her body following treatments. She added that although the size of her breasts makes her self-conscious, she loves the fact that men love them. 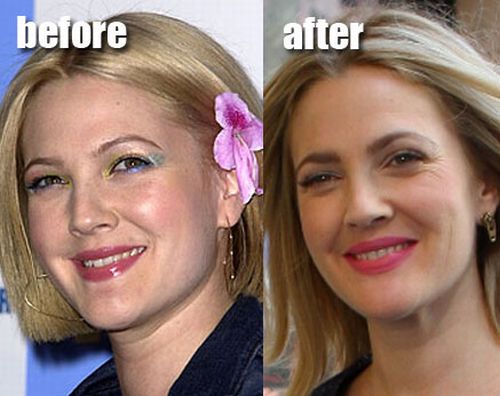 Drew Barrymore plastic surgery before and after

Despite her comments, rumours are still circulating about Drew Barrymore plastic surgery. The star is rumored to have had a nose job however before and after photos of the actress do not reflect any significant change.

Because Drew Barrymore was a staunch advocate of staying natural, many of her fans do not believe the rumors of her plastic surgery. Her openness to the idea now though have given rise to the belief that star may secretly have done plastic surgery. Critics say that they are still waiting for the star to “come clean” about her alleged rhinoplasty and breast lift procedure.

So, are the Drew Barrymore plastic surgery rumors true? Do you think the star’s critics are waiting in vain?